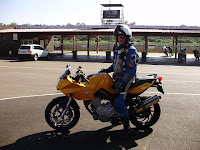 We now have a very short two and a half months to go before we head off on the adventure of a lifetime. The Durban 2 Dublin express (3 BMW`s and 3 adventure riders) depart from Auto Umhlanga, Durban for Dublin, Ireland. 60 Days on the road and approx. 18,500 kms to travel!
These past few months have been a blur of arranging fundraising functions and so far we have had a function at the Heritage Theatre in Hillcrest plus a motivational speaker in Bloemfontein. For this event Jaco spent every day for three weeks before the show travelling to Bloemfontein and back from his farm in Bultfontein, a distance of 170 km`s one way. He set up stands at shopping malls to promote the show and to get people to book for the event. That is what I call commitment for the trip. Upcoming events are the BMW Track Day Swartkops and the SCMSC Dirtfest at Imbabala near Weenen in KZN.
Now comes the time for visa applications, return flight bookings, arranging for the bikes to be shipped back to South Africa and so much more. The route has been plotted and is currently sitting patiently on my PC waiting for the command to send to the device then the main command on 1st May when I enter the where to function and finally press GO !!!!
Two months ago my heart stopped and for a minute I saw the whole trip flashing before my eyes and becoming a non-event. 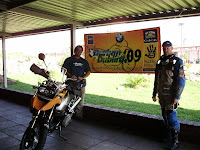 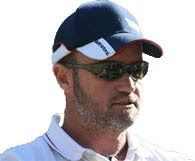 Sitting under a tree in a remote area of Mozambique on one of their many expeditions together, two best friends joked about the future, where they would be 10 years from then, the exploring they would do and tours they would undertake Others had done things that were pretty impressive. Cape to Cairo? That`s famous? What could two KZN locals do that would make people sit up and take notice? What did they do best? With the ensuing light banter between the two a tiny seed was planted... Durbs! What rhymes with Durbs? Hows about Durban to Dublin!? Liking the sound of that, smiling at the thought of such a huge undertaking, they started discussing possibilities, their imaginations running amok. What would be the reason someone would do something like that?

On that day, a million miles away, never in their wildest dreams did they ever think the day would dawn when they would be at the point where their ultimate dream would be a mere few months away!

Roger Scheffer born on the 1st of February 1960 in Eshowe, has ridden motocross for a Kawasaki team on the SA circuit, served some years in the special forces and is currently owner of Mototour Africa and does off road motor bike tours all over southern Africa and Off Road Riding Training as an accredited BMW instructor.

Howard Scott born in Durban on 15 July 1960, has spent most of his years on a bike and is an engineer and photographer. Not only one of Rogers` best friends but also his sons` godfather, they have shared many an adventure together, exploring a lot of Mozambique and the southern parts of Africa together. His skills determined that he would go along as maintenance man and photographer. 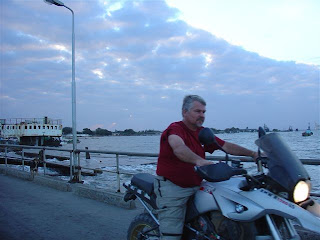 Derick Oldfield a semi-retired KZN farmer, born on the 15 September 1954, in Pinetown makes up the last of the trio. With a passion for bikes Derick assists and supports Roger with his tours.

Jaco Swanepoel , A maize farmer from the Bultfontain region in the Free state makes up the fourth and final member of this adventure . Jaco with his ever present smile and characteristic laugh will no doubt help to keep all the members of the team in good spirits .

It was on one such tour that it was decided that to do the Durban to Dublin trip as a challenge alone didn`t cut the grade, and visiting a wine farm in the Western Cape gave them what they had sought for reason enough!!! 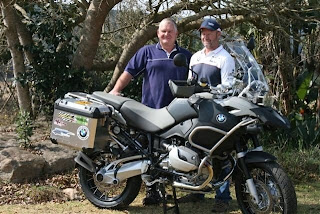 With each one of the group being family men with children of their own, the Pebbles project being run in this area was a fantastic eye opener. With the increasing crime rate, and the sexual, physical and mental abuse toward women and children in South Africa at a constant horrifying increase, it was decided the trip would be dedicated to making a difference. The owner of Clovelly Wines agreed to donate a limited specially labelled Durban to Dublin wine for a fund raising dinner provided that the Pebbles project would benefit - and the pieces started coming together. If every more fortunate person, would sponsor and educate only ONE less fortunate child, would the world not be in a better position to prevent further crime, poverty and abuse?
Millions of people world wide enjoy a glass of wine on occasion. Are all those millions of people aware of the suffering and abuse directly related to alcohol?

Well? Who is Pebbles??

The Pebbles Project was established in 2004 to offer support to children with special educational needs, particularly those whose lives are affected by alcohol in some way, in the Western Cape of South Africa.
We are a registered Educational Trust - IT4088/2004, PBO (Public Benefit Organisation) 930017224, and NPO (Non Profit Organisation) - 049-950-NPO.We registered in the UK in 2008 Charity number 1123172.
The Pebbles Project believes that if a child, particularly one with special needs of any kind, is supported and given the necessary education at an early age, they are far more likely to go on to achieve more at school, and become well-adjusted, educated and achieving adults.
Pebbles works closely with several wine farm owners, who support our work and assist us with the upliftment of their farm worker communities and the education of the workers’ children. Pebbles also supports township crÃ¨ches in Somerset West and Stellenbosch.
Research has confirmed that there are high numbers of children with Foetal Alcohol Spectrum Disorder in the Western Cape of South Africa, as well as those with many other learning difficulties. There is also a high number of children whose lives are affected negatively by alcohol due to parental drinking, neglect, and communities where drinking is a problem. Pebbles does not diagnose children with suspected FASD, as we are not medically trained to do so, but we instead offer support for crÃ¨che staff to identify learning difficulties and how to assist the children with these.
Many children do not receive the early childhood education that will equip them for later life, and there are a high percentage of children who drop out of school before reaching matriculation.
It has to be stressed however that some of the crÃ¨ches that we support simply request basic crÃ¨che teacher training, resources and guidance, and that the farm owners take their responsibility seriously for supporting their communities.
We offer training to creche workers, teachers and parents in methods of working with children, including those with special educational needs and provide the basic educational equipment and resources necessary for early childhood development. We also renovate crÃ¨che and after-school club buildings where needed.

By the end of 2008, we will have trained almost 20 creche teachers, 11 After-school club teachers and impacted on the lives of over 300 children.
The Pebbles Project raises funds through personal donations, company sponsorship, fundraising activities, Government funding and our Sponsor a Child programme. Several UK and South African companies and individuals already support us, and the number of donors is growing daily please have a look at our
Sponsors And Donors page.

The Pebbles Project team are dedicated group of young professionals from education, legal, wine industry and charity backgrounds who are passionate about offering a future for these children with special needs.With REASON ENOUGH, things started coming together fast and furiously, routes were being marked out, sponsors were coming in, a fund raising dinner was scheduled, speakers organised, Racing Champions donated autographed racing shirts to be auctioned off, BMW agreed to the unveiling of one of their latest machines at the dinner, tickets were being sold and things were beginning to happen.

On the 6th August 2008 the first important fund raiser is taking place: A Special fund raising Dinner at the Heritage, in Durban,Where patrons will be entertained by a live presentation by Alfie Cox on his adventure riding and racing career, Good food, a show, the unveiling of BMW`s latest 450 Enduro and the auctioning off of a limited labelled edition of Durban to Dublin wines, and autographed race shirts by Joel Smets (5 times world off road world champion), Christien Anders, (German and European champ) and Simmo Krissi!!! - hoping to secure huge sponsorships for both Pebbles and the trip.
The Durban to Dublin departure date is May 2009 ending June 2009 Route . South Africa , Mozambique , Malawi , Tanzania , Kenya , Ethiopia , Sudan , Egypt , Libiya , Tunisia , Morroco , Spain , Switzerland , Germany , France , England , Wales , Ireland .
The riders will be all on their own, camping en route, eating what the locals eat, there will be no support vehicle.In Germany they will be hosted by BMW Motorrad Germany where they will host a dinner function, and they will give a talk and a presentation of the trip and promote the Pebbles Project.

They then hit the road again to France, cross in the UK, ride up to Holly Head in Wales, crossing over to Dublin and end at the Pebbles UK office. The bikes will then be shipped back in containers from Rotterdam in Holland and the men fly home.
Posted by Roger Scheffer at Monday, March 30, 2009 4 comments: