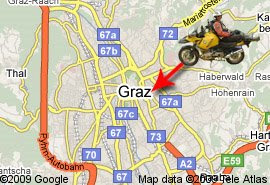 Before I start with Thursday 11th I need to take you back to yesterday. Our plan had been to go to the Ducati Factory on the 12th then Ride into the mountains on Friday.

Howard had made a suggestion that we go up into Austria and have a look at the venue where the Erdsberg Rodeo is usually held, and even though it is not on we could still look at the mountain. Well that idea was discussed for awhile then discarded, as we thought who would want to ride out just to see an empty mountain? So we stuck to the plan of going to Ducati.

Well that evening I was going through some internet stuff and saw that the Erdsberg Rodeo was actually taking place this week end. The 12th – 14th June! I ran up to Howard and Jaco’s tent to tell them and with out further discussion we decided there and then. Erdsberg here we come!

Thursday 11th - This morning up very early and packed and ready to go, we first had to head back to Firenze 100 km’s South of Bolongna where Jaco’s new shock hopefully is waiting. From there we plan to ride as far as we can go in the direction of Eisenerz, the town where the Enduro is being held. 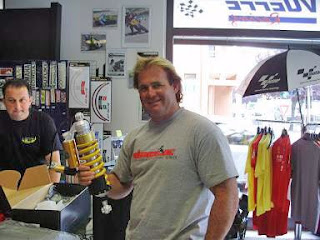 Arriving at Firenze we are told that the shock had not yet arrived, but yes it is definitely on its way. It will be there in about an hour. We go off and get some coffee in town and one hour later we are back at the shop. As we walk in there on the table is a box with one very brand new Ohlins shock absorber and it is the correct one! Jaco is as excited as a small child at Christmas and will not allow any one to fit the shock. He has ridden almost 4000 km’s on the broken shock and therefore going to fix this himself. With in half an hour the old shock is out and the new one is in.

We say our good bye’s to the owners of the shop and by 12h00 we are on the road for Erdsberg. Within 50 km’s Jaco got used to the fact that the bike is not going to jump all over the road every time he goes around a corner or over a bump, and now is really once again enjoying his riding. The smile on his face was testimony to that. 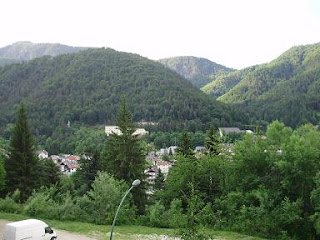 We ride until 18h00 that evening out of Italy and up into the Austrian Alps. What a Beautiful countryside, very high mountains, green grass and forests and there is even some snow on the very high peaks. Real “Sound of Music” country. One expects to see Julie Andrews come running over the mountain tops singing “High on a Hill Stands a Lonely Goater “And no I cannot yoedel!!!

At 18h00 we get to a small ski village tucked away in the mountains (I think the name is Tarvisio) where there’s a large storm building up. The temperature was dropping rapidly and by now we still had 240 Km’s to go before reaching Erdsberg. We decided to stop off at a lodge in the village for the night.

Friday 12th - We are back on the bikes again soon after breakfast and taking the back routes to Erdsberg, we are once again enjoying the scenery and twisty roads. They carry on for kilometer after kilometer, climbing up mountain passes then down again the other side. 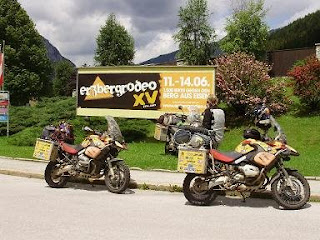 As I was riding I tried to figure out what it was, besides the scenery that was creating such beautiful country side. Then it dawned on me! There was not one sign of litter lying around on the road or in the forests. I started to make a point of looking for a small piece of paper or some thing that should not be there, but could not. It is absolutely incredible how neat and tidy the area is. I’m not talking a few km’s here. For about 160 km’s along the route it was spotless and it seems that most of the country is like that. And it is not because some one comes along after you to clean up. Everyone does it themselves. Amazing!

We arrived at Eisenerz at 13h00 and made our way up to the BMW Mottorrad pits, finding a spot close to the pit area we pitched our tents and went over to introduce ourselves. Our bikes attracted a lot of attention and a lot of foreign journalists came over to chat to us and get some photos of the bikes, we felt like celebrities for a short while.

The BMW support team had some spare 450 enduro bikes there and asked us if we would like to take a ride out onto the mountain and see some of the track and perhaps try some of the slopes. Yea right! As if we would say NO to an offer like that! 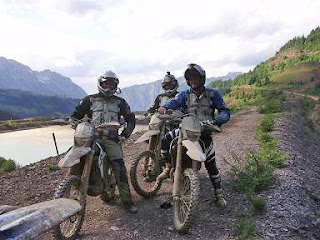 With in half an hour we are all on BMW 450 bikes and playing happily on Erdsberg Mountain, I tell you something, those hill climbs are REALLY steep. When you sit at the bottom of them and look up you have to tilt your head right back to see the top, really scary stuff. To try and walk up them is almost impossible. The guys that enter Erdsberg race are a special breed of racer even if you don’t complete the main event, just getting to the race and qualifying is an achievement in itself.

The race is divided into three parts. Day one and two are speed trial events, where you are individually set off up this track up the mountain, with this massive drop on one side of the road and you are timed over a distance of 14 km. 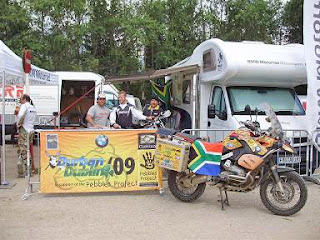 then eliminated. Leaving 500 to start the main Enduro on Sunday. The top 500 riders are seeded in batches of 50 riders according to their best time trial for the start row’s on Sunday.

There were a few South African riders entered this year, Darryl Curtis, Lourens Mahoney and Altus De Wet on KTM and then there was Jade Gutzeit and Grey Dick on BMW 450’s.

Also there was a very strong and noisy support group of guys from SA with the SA flag flying high and the Vuvuzelas being blown constantly it did not take long for every one that was there to see that South African people and supporters go big when we stand behind our teams. 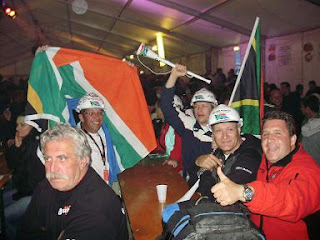 Saturday 13th - Waking up nursing slightly sore heads, I think we partied a bit too much in the beer tent on Friday night. We spent the day chatting to people in the pits and basically took things slightly easy. At the end of the day we were all happy to see that all the SA riders had qualified to go through to Sunday’s race, plus their times were good enough to get spots in the first row of 50 riders.

Let’s just go back to the party on Friday night. We sat and looked in utter amazement at what people get up to when they are in full party mode. There were guys in there underpants sliding down the wooden tables that were set out in a long row after first pouring beer over themselves and the tables.

Some people would run off the table and dive into the air and hope his mates were not to drunk to catch him, watching all of this from the side line and after seeing one guy badly dislocate his knee on the table sliding. We decided to give all that a miss. Dublin is still a long way off. We did however have a few beers with the SA support team; don’t forget we were in Sudan for quite a long time and that is a dry country.

Saturday afternoon is the big parade of bikes and riders through the village of Eisenertz and to witness hundreds and hundreds of off road bikes riding through the village is really something to see. We were fortunate enough to be able to take part in the parade on our adventures. I think that is a first for Erdsberg.

After the parade we were interviewed by the producer of the Erdsberg DVD about our trip and that we hope will be in the official DVD when it comes out. Nice Hey!? 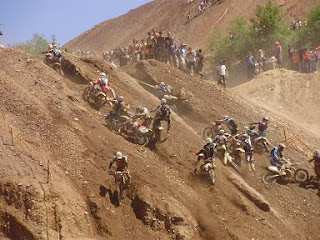 Sunday 14th - Today is the big day. Walking around the pits one can see and feel the tension amongst the riders. The word is that Carl Katosh (The event organizer) has set a route that he does not want any finishers, or if there are as few as possible, that is how tough this race has become.

Watching the start we looked in awe at how the first 50 riders made the hill climbs around and out of the bowl where the start takes place look so easy. Remember how steep I said they were.

From there on as the next group came through (the groups are set of in 20 second intervals) the fun and games started. As soon as one rider loses momentum or traction and falls, the rest of the riders have to change their line and the hill climbs are soon littered with bodies and bikes all over the place. The slopes are so steep that it is impossible to get going again from where the rider has fallen. He either goes back down to try again or someone from the top of the climb throws a rope down to the rider to tie it to the bike and he and bike are then pulled up. This is all energy sapping stuff and they are only in the first 3 km’s of a 38 km course. Madness!!! 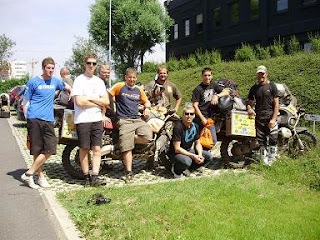 There had been a 4 hour cut off limit been set for the race and everyone was now waiting to see who was going to get in first, if anyone. Well the Polish guy Taddy Blaziack has once again shown the world what a great rider he is. He finished in a time of one hour twenty five, and 45 minutes ahead of the second placed rider, Paul Jarvis from Great Britain, Third place went to Andreas Leterbichler on a BMW 450. Testimony to how good these guys are. When Taddy finished the first thing he said to Carl was that the route cannot get any harder, it was almost impossible to ride the route any worse and it will become impossible. This was Taddys third win in succession making him the first rider to ever do this.

Out of the 500 riders that started only 21 finished. Of the South African entrants there was Jade Gudziet ,Darryl Curtis and Lourens Mahoney. Well done guys all of you that entered are real champions, and to finish you really are “ TOUGHER THAN IRON “ . 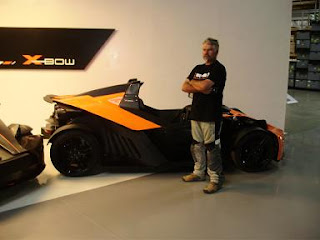 Monday 15th - We packed up our tents at a now very quite race venue, everyone else packed up and left last night. Today we had an appointment in Graz where we were to meet up with Darryl, Lourens, Altus, Chris Burch and Rory to go to the factory where the KTM X Bow car is made. Darryl had arranged for all of us to get a tour of the factory. I must add here that when Darryl had asked me if we would like to go and see the cross bow factory I thought he was talking about the kind that William Tell made famous. Thank goodness I did not say anything and show my ignorance. Looking at the car one can only dream of ever owning one. Let alone getting to go for a ride in it, it is an amazing motor car. Howard had to really control himself to stop drooling over the car.

The rest of today we are resting in Graz doing some washing and relaxing. Tomorrow we head back into the Alps and head for a place called Cortina. No not the car!
Posted by Roger Scheffer at Thursday, June 18, 2009 5 comments: