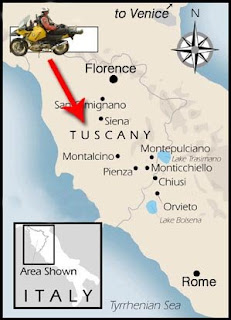 Sunday 7th - This morning we woke up with the knowledge that we were once again getting back on our bikes to continue with this journey of ours to Dublin. This time we are now on our Europe leg of the trip. And also the final stages of a very long and eventful adventure. We all knew in our hearts that the worst was now behind us, but what lies ahead we don’t yet know, but with the cooler weather, decent roads and not having stones thrown at us this can only be something to look forward to.

Leaving Rome under a cloudy sky (we haven’t seen that for awhile) we made our way out of the city following my GPS instructions. No pressure on me! Jaco and Howard’s Europe mapping program was not working so all we had to go on was my GPS. Getting out of the city proved to be a lesson in concentration for me. Trying to keep an eye on the road, watch for cars (and there are a lot of them in Rome) plus watch my GPS and make sure I did not leave the other two behind, was trying to say the least, there were a few wrong turns taken, but as I have said I had the only working GPS so the other two were totally ignorant to the fact that I had got lost. Thankfully the GPS can auto route so it soon had us back on track and with a “That was the scenic route” to the other two, we were soon out of the city and on our way to Monti Argentario, an Island joined by a bridge, this was to be our over night stop and is about 140 km’s up the East Coast.

As we left Rome the cloudy weather decided to change to rain. The first rain we had been in since leaving Nairobi. We stopped under a bridge to put on our rain suits, these of course were covered in dust which soon turned to mud. Anyway we actually enjoyed the feeling of rain on our skins again.

Traveling along the highway we next came across our first indication of the kind of problems that we were going to come across in Europe. Toll Gate! Driving into the toll gate we look at the booth in alarm and see they are unmanned and all the instructions are in Italian! This voice comes over a speaker telling us to do something; we are still not sure what! Anyway Howard and I look at each other in bewilderment and both of us lean over to the speaker box and ask, please help us! Of course we get no response, after about 10 minutes and plenty of dirty looks from the other motorists that had to back up and use another aisle, and franticly pushing all the buttons, This slot opens and we throw in a few coins and the boom opens. Before it can close again we all shoot through and are out of there. I am still not sure if we have cheated the toll consetion out of a few Euros. But we have now put my GPS onto Toll Avoidance mode.

Arriving at Monti Argentanio we look for a Tratoria to get some lunch, finding a very nice looking one over looking the Mediterranean sea, we decide to go in there. We should have taken notice of the cars parked outside, that may have given us an indication of the price we were to pay for our lunch. We ordered a plate of Spaghetti each and when the bill arrived nearly fell of our chairs. 65 Euros! ( R 650 ) For three plates of Spaghetti, Sjoe!!!!

At least the blow was a bit soften by the view we had of the ladies that were tanning on the beach, after being all the way through Africa that was a sight to behold. By the way some of them seemed to have forgotten their tops at home.

After lunch we took a ride around the Island marveling at the yachts and motor launches moored in the harbor, lots of money there.

That evening we camped at a local camp ground on the lake edge and had our emergency rations for dinner, Bully Beef and Smash. That’s the life I suppose of a Trans Africa biker. 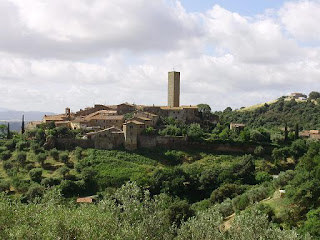 Monday 8th - Today we had a lazy start to the day as we only had a short ride up to Lago Trasimeno. We would be traveling through the Tuscany region of Italy and all I can say that Tuscany is everything that we have heard about the region, absolutely beautiful. The country side is a mosaic patchwork of color of Brown, Green, yellow and many other colors, of the wheat, grass, trees and sunflowers plus the wild flowers that flow into each other.

Riding through the country side taking all of this in plus smelling the freshness of everything around us were soon forgetting the smell of decay and filth that we had been exposed to in some of the countries that we had passed through in Africa.

On top of every mountain there seems to be these walled villages and Monasteries that I am sure date back many years. People still live there today and go about their daily lives.

At one such village my GPS took us into the heart of the village through these narrow walled streets. In the middle of this village we come to a road closed sign plus we are now sitting in the middle of a court yard, feeling very out of place on our bikes and kitted out as if we are intending to raid the place. Before anyone can say something to us I make a u turn and indicate to the other two to follow me. I try and lead us out of there. After about a half hour of riding around these narrow streets with no idea where to go to get out. We find ourselves back in the same square; by this time half the village is now assembled there waiting for us. With a stern wag of a finger from one local guy, (Looking at the size of the knife in his hand, we think he is the local butcher) and a point in the right direction we head off in said direction and are soon out of there and back on our merry way. From then on whenever we approach a walled village on a hill, we now take the alternate route around the outside wall. Feel safer this way. 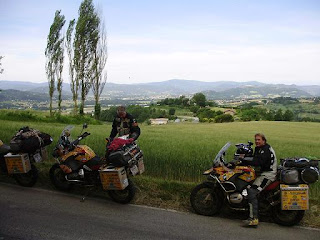 Arriving at Lago Trasimenyo, a lake up in the hills we go in search of a camp site, book into a park home, then head down to the waters edge where there is a restaurant where we have a few sundowners and a meal of hot dogs. Poor Howard has to share a very small room with Jaco and unknown to him Jaco tends to snore VERY loud after eating hot dogs. In the morning Jaco informs us that he had dreamed about Lions on the Serengeti. We tell him we can believe that, we could hear them roaring!

Tuesday 9th - We leave the lake area and now head into the Umbria district and once again enjoy the scenery as well as the mountain passes that we are crossing over. Stopping at a local village for breakfast we are approached by a guy who tells us that there is an Enduro taking place on Saturday in the area and we would be very welcome to come along to watch. Unfortunately by Saturday we will be quite a long way from here so regretfully have to decline the invitation. He does however show us on the map a fantastic route to ride up into the hills. Part of this area is where the World Rally Champs take place. Really beautiful countryside and spectacular riding area.

Late in the afternoon we arrive at a camp site in the National Park Forest near Casentine where we overnight.

Wednesday 10th - This morning we head on our way to Bologna where we are due to have two rest days and visit the Ducati Factory. Soon after we leave the camp site, we ride through a village when Howard spots a small motor cycle shop and on the window there’s a sticker claiming that they are agents for Ohlins shocks. By now Jaco has been riding his bike for 3800km’s with his ( Spring ). That is all you can now refer to his shock as, and his poor kidneys are almost about to stop functioning completely.

I need to add here that both Howard and I are in full amazement and admiration of Jaco! To have nursed his bike so far in its current condition and to have been able to keep on the road without crashing. Its a testament to his riding ability? 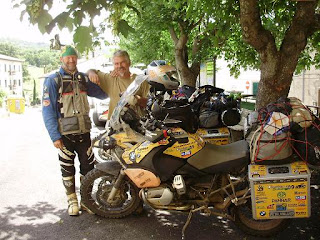 Back to the motorcycle shop. We make a quick U-Turn in the street and go into the shop with mixed feeling, what chance would a small shop in a small village in the middle of Italy have of having a BMW Ohlins shock in stock.

There is a motorcycle God and he was smiling down on Jaco today. The lady behind the counter says, “Yes” they can get a shock for Jaco sent up from Milano and it will be in the shop tomorrow morning. Right there and then Jaco could have kissed her. Controlling his emotions Jaco accepts the order and with a promise to be back in the morning to collect the shock, we say our goodbyes and head on to Bologna.

We are now camped at “Cito de Bolonga” on the outskirts of Bologna where we will rest for two days, Fix Jacos shock and visit the Ducati factory.
Posted by Roger Scheffer at Friday, June 12, 2009 3 comments: