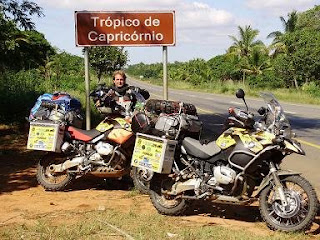 Wednesday 29th April was a big disappointment day for us. Howard arrived at the Swazi Border to link up with Jaco and I. With our passports and visas in hand (So we thought) on inspecting the passports we discovered that Howard’s UK visa had been approved, but someone forgot to stick the visa into his passport.

After much phoning around the British Embassy in Pretoria told us that Howard’s only and quickest option to sort the problem out would be to go to Pretoria and collect the visa. We sat and had a quick Chinese parliament and agreed that Howard would ride up to Pretoria while Jaco and I continued on into Mozambique.
Howard rode up to Pretoria and sorted his Visa then rode on to Nelspruit to overnight. A distance of over 1000 Km’s, All in one day! ( Iron Butt )
In the meantime Jaco and I rode through to Nyambane where we overnighted at Vic and Adelaid’s bed and breakfast at the Nyambane/Lendela T Junction. 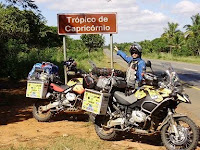 We had an early night and the next morning we rode up to Velencoulos, I need to add here that the road from Maputo to Nyambane is very good hard top, A good speed can be maintained between the towns, A word of warning though, When entering the small towns along the way beware of the cops, they love to pull you over if they suspect you are traveling anything over the 60 km an hour speed limit in the villages.

After Nyambane the road detereats badly and becomes one potholed road with a little bit of tar in between.
At Velencoulos Jaco and I went off to find our accommodation, Which is a lovely lodge ( Blue Water ) right on the beach with a fantastic view out to see and looking across to the Islands of Bazarouto and the Archapelagos.
Getting there mind you was a bit hair raising. 6km’s of very soft beach sand track, and this was done on our bikes with all the kit loaded. The 2M’s tasted really good when we eventually got to the lodge.
During the night we had been trying to get hold of Howard and check on his progress, But unknown to us he had a problem with his cell international roaming connection and was out of comm ’s.
The next morning Jaco and I decided to start back tracking to try and find Howard. Luckily and with much sighs of relief we found him riding down the road towards Velencoulo, so we did not have to travel to far back to fetch him.
Howard in the meantime had had his fair share of drama, on his way to his overnight stop at Nelspruit an oncoming car did not dim there lights. Blinding him and causing him to ride off the road, falling hard. He is now nursing a very bruised rib. Jaco is now playing nurse maid and feeding Howard with Voltaren tablets, Seems to be working as Howard has so far turned the offer of a Voltaren injection down. (Can’t be that sore ?)
After the fall the next day when Howard was riding up to meet us in Mozambique, He was 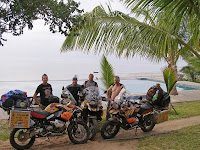 stopped in one of those villages I spoke about earlier and the long arm of the law wanted a fine for speeding (112km’s in a 60km zone) after talking to the cop in Howard’s best persuasive way he got off with a R50.00 donation to the police children’s fund and was once again on his way.
Saturday we spent the day relaxing around the pool at Blue Water Lodge and basically recharging our batteries.
Today, Sunday we left Velancoulos and took the EN 1 road heading North to a town called Chimoio in Northern Mozambique, We have been hosted by Pannar Seed to the use of there very comfortable house and Felix the local Pannar guy here took us out to dinner this evening.
I need to here add a little amusing incident that happened when we got into the house.
Jaco was having a look around, And on inspecting the bath room he walked out with this puzzled look on his face, We asked him what was wrong and he turned around and pointed to a basin that was set about 1 foot of the floor, Jaco wanted to know how the heck he was going to get down so low to brush his teeth. Well when we explained to him what a Biddy’ was the look on his face was worth a million dollars.
Tomorrow we leave for Tete where we will overnight before crossing into Malawi. Before leaving Chimoio we have been invited to visit a local School here in town run by a group called TIOS , The children here at this school are taught how to live and survive in an environment that has suffered from civil war and now hiv/aids. We are looking forward to seeing how this group of volunteers is making a difference to the future generation of Mozambique.
Posted by Roger Scheffer at Tuesday, May 05, 2009 4 comments: