Friday, 24th April - After all the months of planning and worrying the day of departure finally arrived.

BMW Auto Umhlanga hosted a cocktail party for (Roger, Howard and Jaco) with the press there to see us of. It was amazing and mind blowing for us to walk into the reception area, realising approximately 150 people were there to wish us well and on our way.

The Mayor of Durban the Honorable Obed Omlaba presented us with a letter of greetings to hand over to the Mayor of Dublin. We started our bikes, and very nervously rode out of the reception area. I think the thought was going through all of our minds that we dare not drop our bikes now!

On Saturday morning we were back at Auto Umhlanga bright and early to meet up with a group of riders that escorted us out of and rode with us as far as Empangeni. What a fantastic sight to see three Dbn-Dub bikes followed by approximately 60 BMW motorbikes down the highway!

The trip has been planned and researched down to the last detail, but something’s where out of our hands and control, one of which was our visa applications. By Friday night we still did not have our Schengen visas and all the public holidays this past month did not help the situation.

We decided that we were still leaving on our planned date and would travel around doing a bit of site seeing in Zululand, slowly making our way to the border. 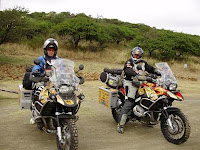 We have been welcomed and looked after by the locals in every town we visited. Our first stop was in Melmoth to attend a Hawaiian party at the country club. On our arrival at we were asked to ride our bikes into the hall where the party was held. Well, I was riding in front leading Howard and Jaco when we had to cross over a small patch of grass, but in this grass was a brick lurking and the next thing I knew I was lying on the ground with my bike upside down in front of the Melmoth crowd (fully loaded) Howard and Jaco of course sat on their bikes and I heard them saying “Lets see if he can pick that up “ Not very easy! Well in true form the party was fantastic and a good time was had by all.

On Sunday we made our way to Eshowe for the next rest stop. While waiting outside the Pick and Pay to buy a few rations we ran into Dave Wylie the GM of Shakaland who invited us to lunch at Shakaland. We were entertained to a traditional Zulu dance in the great hut. This is the same venue where Kingsley Holgate starts all his expeditions. After a lovely lunch and a quick photo shoot with Larry from the local newspaper, The Zululand Observer, we had to say good bye. 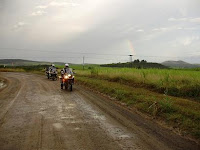 Erick Howe invited us to stay over at his game farm in Empangeni and treated us to a braai in the African bush.

We are now sitting on the border and waiting for Howard to catch up to us with the visas.

He volunteered to head back to to collect them. Today we cross into and will push on as far as we can in the next few days to make up time.